The Winter Life of the Salt Marsh

As the shortest day of the year has passed and we officially enter the winter months, the natural world around us seems to be hibernating. Leaves have fallen off deciduous trees and grasses and flowers are mostly dormant, waiting for spring like the insects and many other creatures of the natural world – hunkered down until warm weather returns. 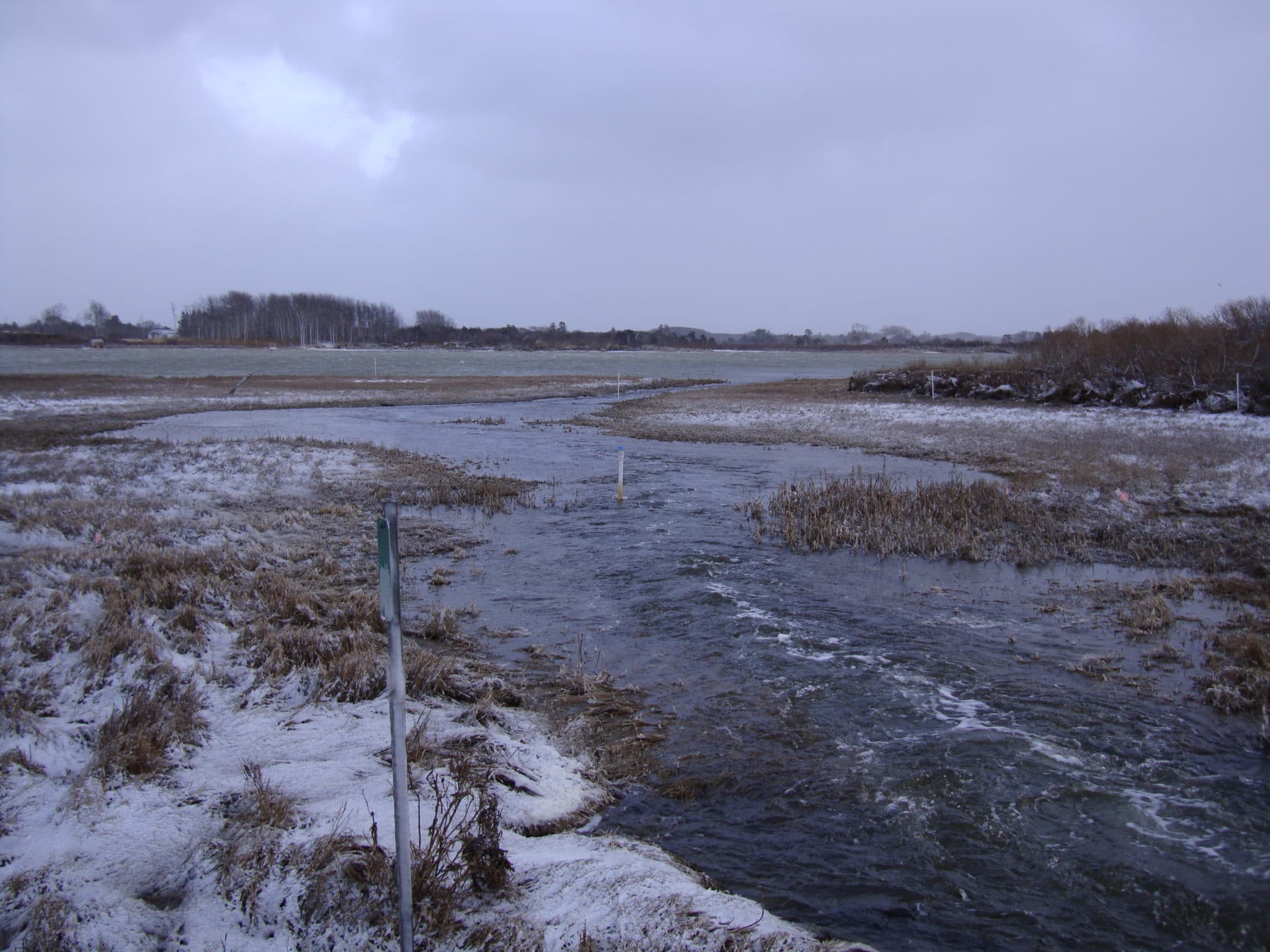 _
Snow and ice along a salt marsh creek bank
Looking out over the expanses of salt marsh at the Creeks or in Polpis Harbor, you might think that the salt marsh was completely dormant also – resting and waiting for spring but looks can be deceiving. The winter salt marsh is actually quite ecologically active, even if most of that is hidden from view. Salt marshes, the boundary between salty oceans and freshwater inlands and uplands comprise one of the most biologically productive ecosystems in the world. These oft overlooked transitional zones provide nursery grounds for many of the commercially and recreationally important shellfish and fish in New England, as well as being home to a variety of wildlife and birds. The unique placement of salt marshes, getting salt water from the oceans and freshwater from the uplands, makes these areas rich in a variety of minerals and nutrients. One of the biggest values of a salt marsh for human settlement is the ability to buffer the surge and waves created by large storms and to trap and hold excess water, slowing its release while filtering out excess nutrients like nitrogen and phosphorus from reaching our harbor areas. 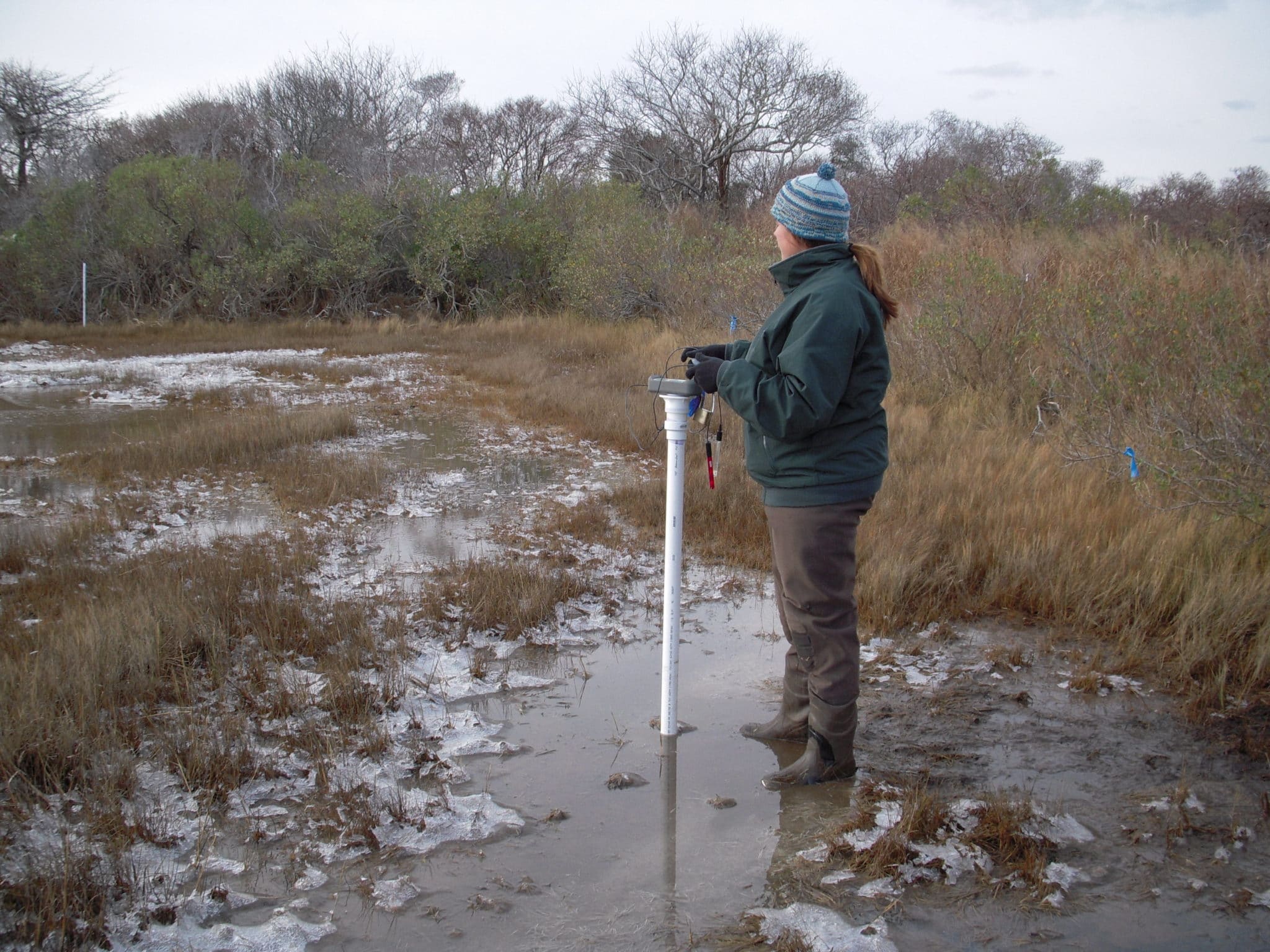 Measure tide water levels during winter storms in a salt marsh
In recent years, the biggest storms to hit Nantucket have come in the winter months – Nemo (Feb 2013), Sandy (Oct 2012), Juno (Jan 2015) etc. – and with each of these storms have come highest tides and storm surges, inundating our downtown streets where the salt marsh had long ago been filled in. In harbors where salt marshes still thrive, storm surge and high tide water was taken in, the rush of water slowed down and halted before reaching upland infrastructure. Salt marshes provided the barrier to protect areas of the island from more severe impacts.     And in winter, those higher tide storm events arrive at just the right time to help facilitate the next biggest function of the salt marsh. As winter comes, the dominant plant in the salt marsh, Smooth Cordgrass (Spartina alterniflora) goes dormant, waiting for spring to grow again. Cordgrass leaves brown and dieback to the salt marsh surface, slowly decaying and breaking off with the help of big storms and shifting ice sheets. Insects and microbes (detritivores) early work on consuming and breaking down this abundance of dead vegetation. An acre of salt marsh can produce up to 10 tons of cordgrass each year! Some of it stays on the salt marsh surface, helping build new organic soil layers. Some of the nutrients and minerals stored in the dying vegetation moves out of the salt marsh on retreating high tides, transporting much needed nutrients to nearby ocean areas. The nursery of the sea, this rich detritus provides food for young fish and shellfish in the spring. A variety of amphibians, insects, snails and crustaceans find their way to the salt marsh in the spring to feast on the rich detritus released each winter. 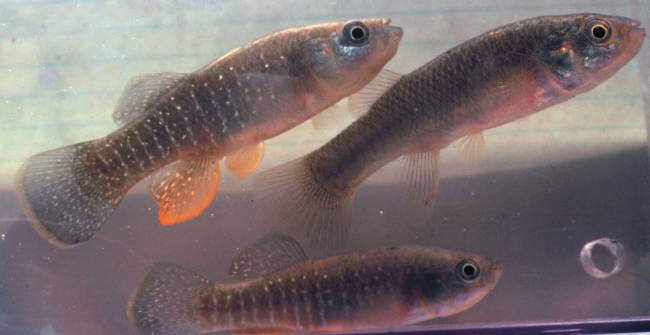 The mummichog, a diminutive salt marsh resident, lasting out the cold winter in small tidal pools.
Salt marsh tide pools, pockets of salt water held up on the surface of the marsh, away from the daily tidal pull, act as refugia for small fish and hunting grounds for birds in the winter. The diminutive mummichog or mud minnow (Fundulus heteroclitus) hunkers down in these sheltered, warmer pools in the winter until migrating to the salt marsh creeks in the warmer spring weather. Waterfowl and wading birds particularly haunt the winter salt marsh, foraging and grazing, searching out their invertebrate prey. You may not see fiddler crabs in the winter but they are still in the marsh, burrowed down deep in the soil, waiting for warm spring. 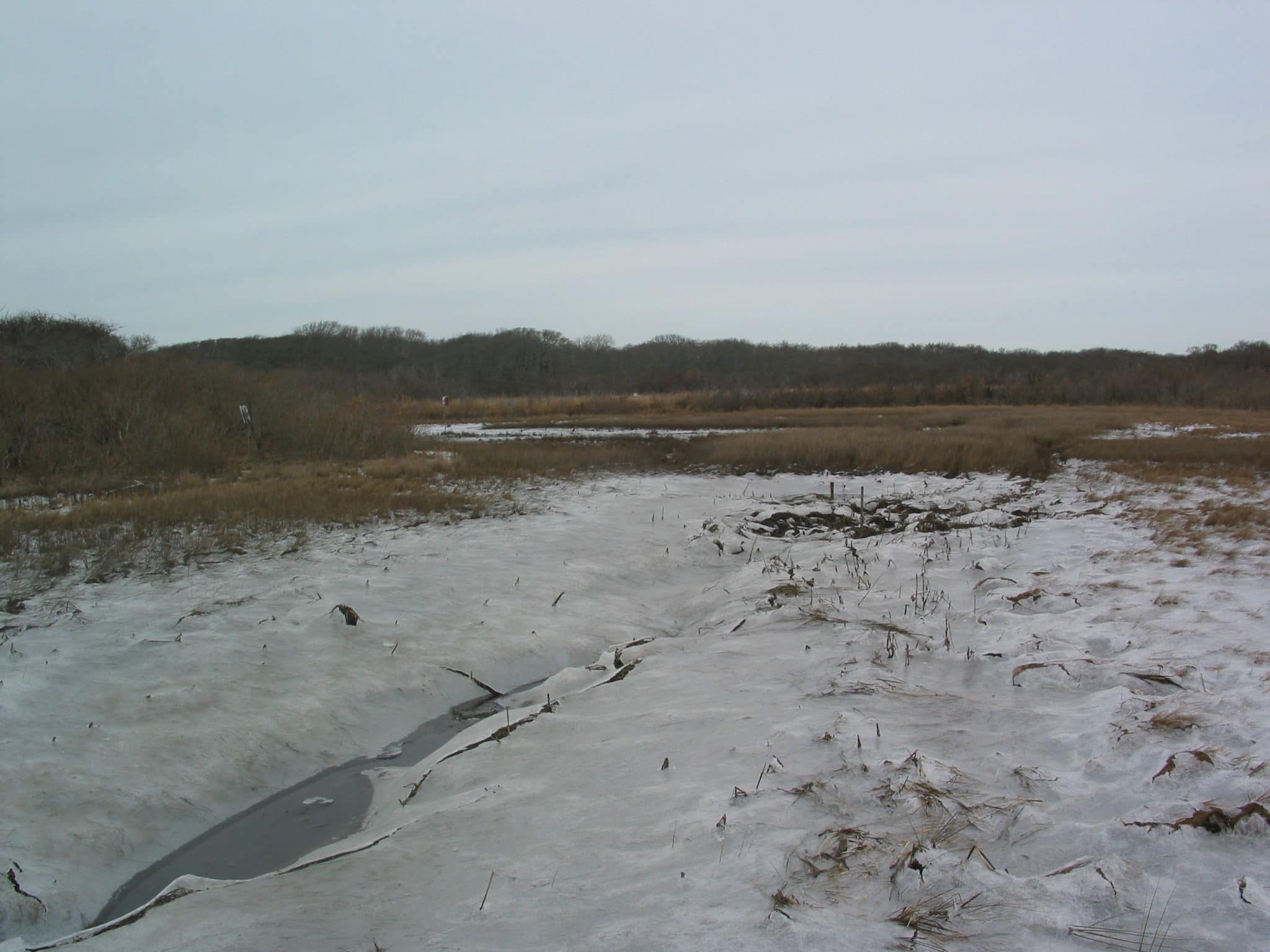 Covered in ice, the salt marsh is busy preparing for spring.
Through the long, cold, dark winter months the salt marsh is still functioning, protecting our coastlines and providing shelter and food for a diversity of species. And waiting, prepping for the warm weather of spring for the grass to grow again and brighten our coastlines with a swath of yellow/green!
Posted by Jen Karberg at 8:47 PM