This past weekend Nantucket was coated in ice and snow. Now, living in the UP we would have said that this past weekends storm of just a few inches of snow with gusting wind was nothing - no big deal what so ever! But here, out in the Atlantic where it hardly snows - this was a big deal! And it stayed cold, with the thin layer of snow sticking around (I've been informed that this is unusual). So this weekend when the sun came out and the snow was sparkly, we decided it was time for an adventure!

Sierra led off the adventure, romping like a giddy baby puppy in the cool weather (she's still a snow dog at heart!) 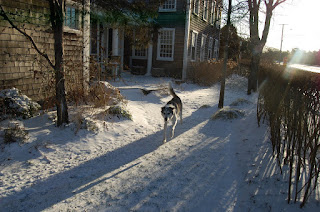 So we load up in the tank and head off to Windswept cranberry bog to see what we can see and let the dog enjoy her romp. THe bogs stay flooded a bit over winter and we were greeted with lovely ice-encased little wetlands. 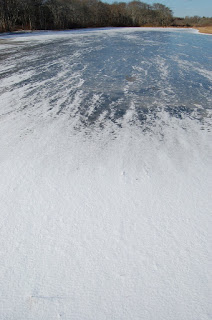 Occasionally a few of these abandoned, leftover cranberries were found, lovely red against the frozen earth. 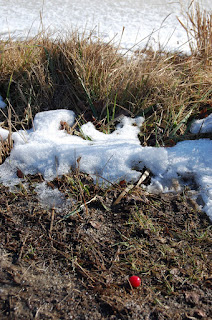 And then - the dram began. Sierra took off as she does - running after some scent or sound, crashing recklessly through the underbrush. We call and call and get fed up and then up she runs, happy as can be - but what in the world? 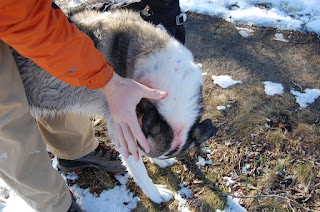 A bloody doggie!!! Of course, we instantly thought she'd killed a deer 'cause that was a lot of blood! But no, we realize that every time she shakes her head - out comes a droplet of blood. Poor doggie had about a centimeter tear right through the tip of her ear and she'd bled all over her head - that's right - all that blood was hers! 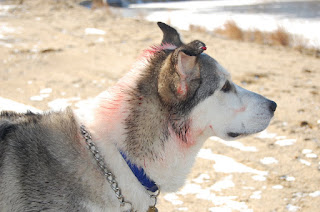 Don't worry - she didn't appear to be in any pain or to care about the wound. It was the only spot she was hurt - what caused this? At first I wondered if she'd ran out on the ice and fallen through but no evidence! And then we saw it - the likely culprit. Doggie has not yet gotten used to the thick underbrush of the 'Tucket where Smilax's thick thorns are always waiting - she most likely got a thorn through her ear and pulled through it instead of pulling it out!

Once we realized she was fine - the real question was how to get her home with out getting blood all over the tank! 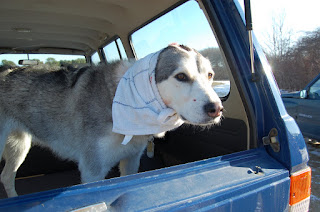 Poor Sierra! Isn't she just pitiful! Don't worry - she's fine now, just not quite as pretty. And I'm fairly certain she's learned nothing from this 'adventure' and will be charging right through the next patch of Smilax she sees as long as there's some interesting smell or sound on the other side!
Posted by Jen Karberg at 9:17 PM

Poor doggie - the babuska was the part she liked the least!

I thought she was covered in old cranberries...poor puppy!

poor doggie--she *does* look the unhappiest with the babushka. cleaning her up couldn't have been the most fun in the world, either.