Christmas is coming and boats are getting canceled...

I always thought that the Upper Peninsula was in the middle of nowhere, that travel was difficult and iffy and unpredictable, that you had to be prepared to stay in your house and not be able to get anywhere for any number of reasons. It was...but Nantucket, in the winter, is worse! There is just no predicting what might happen. The Steamship Authority (which is one of two ferry boat companies servicing the island but the only with a car ferry) has a lovely place on their website listing cancelations and the number of cars waiting to get on each half hour. High winds come up, the boat does cross the sound, heavy storm, big snow, driving rain - often you look outside, think the weather is perfect but the boat doesn't run because the weather is bad in Hyannis - our sister port in America. It just adds this element of surprise to travel out here! Makes is hard on a weekend like this one when EVERYONE Is trying to get off the island and travel for Christmas and New England is getting it by big winter storm after big winter storm. We're not heading off until MOnday so keep your fingers crossed! Course you may be asking why you would take your car off the island to travel when its more expensive and you can fly. Two things to think about - 1) it ends up being cheaper and less of a hassle to drive all the way the Michigan from the island of Nantucket in the Atlantic ocean then take a ferry or plane to Hyannis, take a bus to Boston, catch a plane to Detroit, get to parents house! 2) if boats aren't crossing the Atlantic due to wind and weather - do you really want to be up in the air in a tiny 10 seater plane?

Noah and I headed down to check out the festivities - after Noah had finished his first road race! A 5 miler - he did fantastic! He's only taken up running recently - ironically coinciding with when I was forced to stop running - had to fight down the running jealousy as he crossed the finished line! 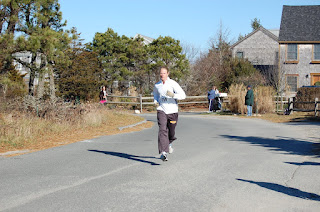 Here he is putting in the last burst of steam to cross the finish line!

Off to Christmas Stroll just in time to watch Santa and Mrs. Claus arrive to Nantucket Harbor at the Straight Wharf on the Coast Guard ship - that's right, in Nantucket Santa comes over sea not by air! 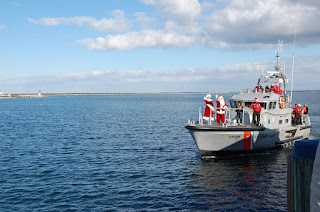 After that, Santa and Mrs. Claus get in a horse drawn carriage and are lead up Main Street by the Town Crier - a lofty and important position - then Santa gets to meet with kids and Noah and I went to find the famous mulled cider to warm us up. Delicious if priced for tourists! The chowda tent was much more reasonable and we left full and happy and chock-a-block full of the Christmas season. Now - if only I could finish my Christmas shopping, everything would be dandy!

To top off the Christmas feeling, we had our first New England snow last night - about 3 inches or so were left this morning and it will melt soon but that doesn't stop the plows from going like crazy. I swear that last night the plow went past 7 times in 3 hours - I don't know what Nantucketers would do in a really storm!!!! They must just be so excited to get out and take care of snow that they over do it. Now this morning I'm hearing plows clearing out parking lots when there is no need - its obviously going to melt soon - its the nice and slushy snow that isn't gonna freeze or stick around! Oh well, at least its pretty and its not staying! 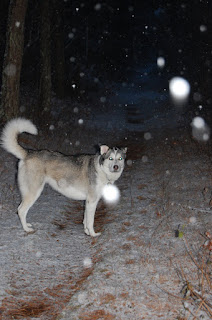 Our arctic snow dog was extremely excited for the snow though! I don't have the heart to tell her its going away!
Posted by Jen Karberg at 8:01 AM

Love the Claus arrival via boat! Wishing you safe travels to Michigan! !

Thanks Ali! All that crazy snow will be in our way! Merry Christmas and enjoy the Northern Michigan snow!

What a wonderful update and kudos to my fav son in law! He looks so manly running! I love the pic of Sierra.. we will be happy to see her and you and Noah next week. Drive safely! Love Mom

Jen, there's a chance you and ali might get to meet-- She'll be at Glen's hopefully next weekend, and he lives only a few blocks from Katacia!

Awesome photos-- We are experiencing quite the winter wonderland here... Sierra would be jealous!