I Wanna Be Consequence Free....

I finally got the spend the last weekend over in America visiting my sister Amy in Boston and going to a concert of one of the best bands ever :) At least that's my opinion and I'm sticking to it! We went to see Great Big Sea - a canadian/folk/rock band from New Foundland! They give a fantastic live show - the music is so upbeat, you leave exhausted from dancing and jubilant from the energy of the music! Take it from me - if you ever get a chance, go see them live!

Amy and I spent the weekend exploring all the history of Boston - we walked the Freedom Trail until we got bored - its basically a walk through downtown Boston highlighting all the historic buildings and places of importance. Like Paul Revere's grave: 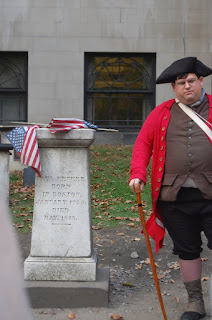 Yes - that guy is dressed up - it is Boston after all.

The best costumes we saw weren't on the people though - Amy and I stumbled upon a little dog costume party in Boston Commons! 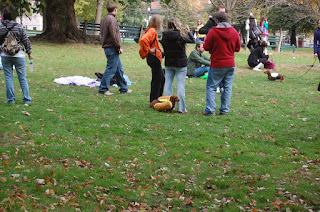 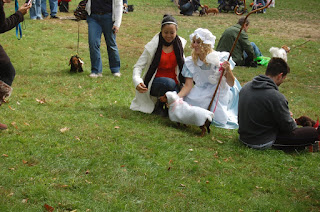 And last but not least - Little Bo Peep who found her sheep - or at least as close as she could get!
Posted by Jen Karberg at 6:38 PM

It would appear Bostonians have waaaaayyyyyy too much free time when the Sawx are not playing....